In other words, never give me power tools.

Power tools! No, that’s not what this post is about, but this week I got to be totally unnecessary and over the top in my tool-age for putting together a model car. Did I need a high powered Ryobi drill to put my Ferrari together? No. Did I use one anyway? YEP, you betcha!

Honestly, if I wasn’t such a flibbertigibbet, I would have this thing together in a few minutes, instead of the near hour it took me. But, I’m clumsy and easily distracted, which resulted in most of my model-time being dominated by Youtube videos and a few too many left over Easter chocolates. If any of you are smarter than a fifth grader (reference intended), you’ll have your model put together super fast and’ll be left with a stunning, candy apple red Ferrari to put on your desk or a shelf. Lets get started! 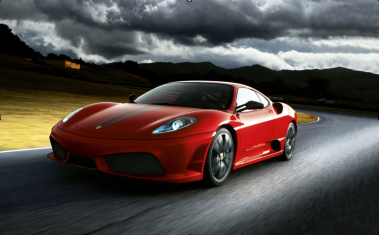 The Ferrari F430 is a sports car that was produced by the Italian car manufacturer Ferrari from 2004 to 2009. A successor to the Ferrari 360, it debuted and was first seen at the 2004 Paris Motor Show. Its replacement, the Ferrari 458, was unveiled on the 28th of July,2009. Designed by Pininfarina under the  guidance of Frank Stephenson, the body styling of the F430 was revised from its predecessor, the Ferrari 360, to improve its aerodynamic efficiency. Although the drag coefficient remained the same, downforce was greatly enhanced. 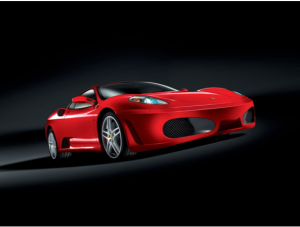 looked significantly different from the 360. A great deal of Ferrari heritage was included in the exterior design. At the rear, the Enzo’s tail lights and interior vents were added. The car’s name was etched into the Testarossa-styled driver’s side mirror. The large oval openings in the front bumper are reminiscent of Ferrari racing models from the 60s, specifically the 156 “sharknose” Formula One car and 250 TR61 Le Mans cars of Phil Hill.

You don’t get much more awesome than the Ferrari Spider which is the convertible version of this enigmatic coupe. With awesome performance and a beautiful design, it was only a matter of time before they put it into model form. With an MSRP of $186,925 to $217,318 in the United States, £119,500 in the United Kingdom, approximately €175,000 in the European Union, and $379,000 for the base model to $450,000 for the Spider F1 in Australia and New Zealand, this isn’t likely a car that’ll make it into everyone’s driveway. But now you can have one at a fraction of the cost and er…a fraction of the size.

The only thing better than a pretty new toy is a pretty box! In line with the extraordinary design of the car itself, Maisto took extra care to design a box that was just as aesthetically 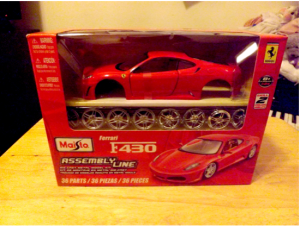 appealing. You can always tell the amount of workmanship a company puts into their products by its packaging. If they don’t care enough to create packaging worthy of their product, then it’s obviously not worth your money. I was absolutely delighted with the packaging of my Ferrari and, as much as I’m against clutter, I practically  wanted to keep the box!

The front is detailed in a window style that 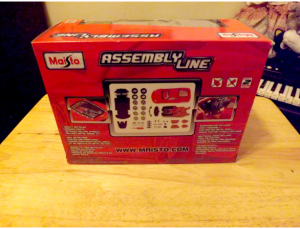 displays the body of the car and two sets of rims, and has a lovely picture of the finished car. The back shows all thirty six parts and gives a bit of information about the assembly process and the car itself. Nothing too overly complicated which I like, had it been in anyway intimidating, I may have left it on the store shelf!

When I first opened the box I’d expected it to explode with teeny tiny pieces that I would find myself losing in a matter of seconds. After all, thirty six parts does sound like quite a lot, but  they were the perfect size to hold and snap into place with little to no effort at all. No glue, no tweezers, no fuss, hassle or mess. This thing was like a dream. The headlights were a little 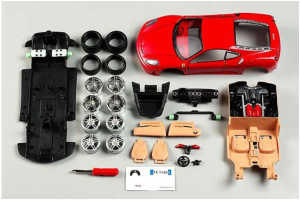 tricky but that was due to my own ignorance. I put them in pretty close to the beginning and every time I turned the car upside down to add another piece, they fell out. I can say that, even though no glue was necessary, if I could redo it, I’d add a dab of Elmer’s or maybe something stronger just to keep them in place permanently. 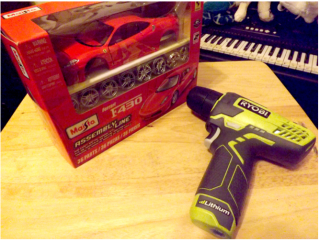 I got my drill, my Ferrari model, a hand full of chocolate Easter eggs and got to work. Now, putting the chocolate down to start my project wasn’t the easiest of tasks, but I muscled through it and got busy. Out of the box, the car itself was beautiful, even before it was put 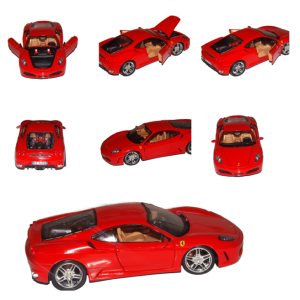 together. The diecast metal body was painted a bright, shiny, candy apple red that I wish I could  have covered in glitter because honestly, that was the only thing that could have made it any better. I thought the diecast metal, being, well, metal, would be super heavy and hard to keep a grip on, but it was the perfect weight. I mean, I wouldn’t throw it at anyone, but it didn’t feel like a burden to hold. Once everything was screwed (drilled) and popped into place, the finished product was nothing short of awe-inspiring. I couldn’t be happier with my little project. Shop72 has done it again!

It’s no secret that model airplanes have been a staple of creative kids toys for as long as one can remember, but, in recent studies, they’ve proven to be even more useful in childhood development than you could ever imagine. You may think model kits are a thing of the past, but in fact there are more exciting, diverse and challenging kits available now more so than ever. And they’re only a click away.

Once a beloved pastime of your parents and grandparents in the fifties and sixties, model aircrafts date back as far as ancient Egypt. In fact, what’s considered by modern archaeologists as the oldest model aircraft in existence was found in the tomb of Saqquara during an excavation in 1898. The plane, aerodynamic in design with wings that would be considered by today’s standards as fuselage, is thought to date back to around 200 BCE. It’s amazing to think that an ancient civilization would be thinking about something as advanced as flight, and even more amazing to think that this was a child’s toy.

According to professor Emeritus Seymour Papert of the Massachusetts Institute for Technology, “Constructionism means learning by making something. LEGO is an example, writing computer programs is an example, painting is an example. And what you learn in the process of doing that sinks much deeper; its roots go deeper into the subsoil of the mind than anything anybody can tell you.” By building model airplanes, children are learning hand eye coordination, problem solving by trial and error and even social skills when they share their creations with their siblings and friends. Starting your child off early with a love for mathematics and engineering is definitely a step in the right direction.

The Lockheed SR-71 “Blackbird” is a long-range, Mach 3+ strategic reconnaissance aircraft that was operated by the United States Air Force. It was developed as a black project from the Lockheed A-12 reconnaissance aircraft in the 1960s by Lockheed and its Skunk Works division. Renowned American aerospace engineer Clarence “Kelly” Johnson was responsible for many of the design’s innovative concepts. During aerial reconnaissance missions, the SR-71 operated at high speeds and altitudes to allow it to outrace threats. If a surface-to-air missile launch was detected, the standard evasive action was simply to accelerate and outfly the missile.[2] The SR-71 was designed to have basic stealth characteristics and served as a precursor to future stealth aircraft.

The SR-71 served with the U.S. Air Force from 1964 to 1998. A total of 32 aircraft were built; 12 were lost in accidents, but none lost to enemy action. The SR-71 has been given several nicknames, including Blackbird and Habu. Since 1976, it has held the world record for the fastest air-breathing manned aircraft, a record previously held by the YF-12 (via: wikipedia). 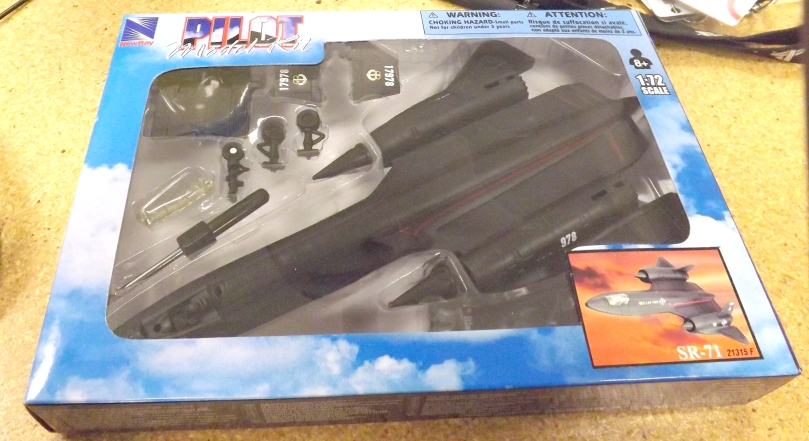 Now, I have to admit, I bought this thing for myself, but I couldn’t help but wonder how it would benefit the little ones in my family. While, it looks like a bit of a daunting task to undertake but I assure you, if I can put it together, anyone can. Probably blindfolded and hogtied. When you open the package it comes with everything you need to put it together and display it. With lots of little pieces, screws and a tiny screwdriver I have to warn you, while this is a kids toys, it’s not recommended for anyone under the age of eight. 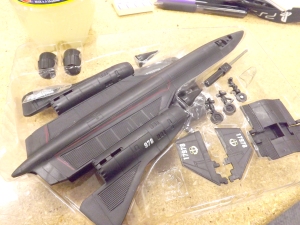 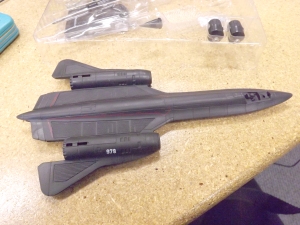 if you felt like it, with an easy to read instructional diagram on the back. Even without the instructions I found it simple to put together. By the  time I was finished I was almost disappointed because I didn’t have another one to work on. But, at thirteen bucks a piece, I’m pretty sure I’ll get my hands on another one pretty soon.

Honestly, I was impressed by how detailed this thing was, even as someone who isn’t really all that of a model builder or collector. The lines and etchings on the body of the plane look laser cut even if they’re not and the matte black finish gives it a realistic look that doesn’t immediately scream “plastic” when I look at it. It’s not very often that you find something that’s cheap AND well made. Quality has gone down in recent years, but I have absolutely no complaints here.

After sticking this thing together, I placed it on the included stand, stepped back and fell in love with model building forever. I know that when I have children, whenever that’ll be, I can 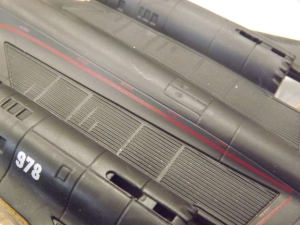 say with confidence that they will be building model planes with me whether they like it or not. Hey, a little mommy time never hurt anybody! At the end of the day, model planes or models of any kind for that matter, are beneficial in a multitude of ways. Jumpstart your kids learning process and get them ready for a technological future that’s as exciting as it is terrifying. If you want to get your hands on this plane or a million of the others they have, it can be found at shop72.com.